Because the Death’s Head Watch and time travel play such an important role in The Artifact Hunters, I used other time pieces in the story.

In 1901, in the Mediterranean Sea off the Greek island of Antikythera, an artifact was retrieved from an ancient wreck. It is a complex clockwork from ancient Greece capable of predicting astronomical events, and is now known as the Antikythera mechanism*. It is also one of the magical artifacts depicted in The Artifact Hunters, as time plays a huge role in the story. 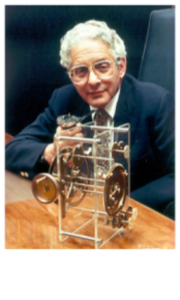 This mechanism, which may date as far back as 60 BCE, has 37 gears that track the movements of the sun and moon, allowing ancient astronomers to predict eclipses. Some have even called it an “analogue computer.” X-ray imaging has allowed a reconstruction of the device, whose history is lost in time.

Naturally, in this story that features time travel, an Antikythera mechanism, a Death’s Head Watch, and a boy from Prague, I felt it was important to include the fascinating Prague Astronomical Clock in the Old Town Square.

One of Prague’s most well-known and arresting attractions, it is more than a timepiece, and because it dates from 1410, is also the world’s oldest operating clock. In addition to an astronomical dial, which follows the cycles of sun and moon, there is, on the hour, the “walk of the Apostles”, and figures flanking the clock that also move. You can find videos of the clock as the Apostles move through the chiming of the hour. I was lucky enough to watch it in action one morning a few years ago.

In this image that I took while watching the clock you’ll see four figures flanking the clock. The skeleton, representing, naturally, Death, is a figure that also is featured in The Artifact Hunters. 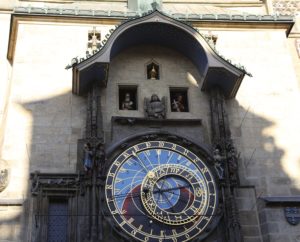 The astronomical dial is an astrolabe (an astronomical clock) that includes a moving zodiacal ring. There are numerous stories about the clock and its importance to the Czech people, including the significance of the skeleton of Death which nods its head as the clock strikes. The clock is silent between the hours of 11 PM and 9AM. Try to watch the clock in action on one of the many videos available – there is one in the detailed article below that also explains the mechanism.

“The Jewel of Prague: The Oldest Astronomical Clock in Use”, by Stefan Andrews, The Vintage News, March 8, 2018.

*Fun fact: A replica of the Antikythera mechanism can be seen in the American Computer and Robotics Museum in my own hometown of Bozeman, Montana.

Authors in the time of Covid need all the help we can get. If you enjoyed The Charmed Children of Rookskill Castle, and think you’d enjoy The Artifact Hunters, please consider pre-ordering from one of these fine book sellers, with my thanks.