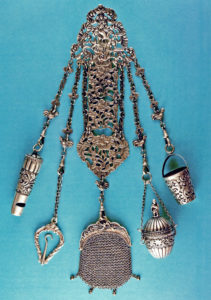 I spy a whistle, a tiny purse, a thimble, and…?

The original title of the novel was Chatelaine. You may be reacting to that title the way that the Viking Children’s marketing department reacted: What in the world is a chatelaine? Because they feared that young readers would have no clue, we changed the title.

I love the word, and it forms a crucial part of the story (although I do love the new title, too, and those wise marketing folks were right.) 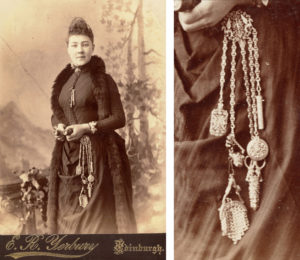 The chatelaine had been a gift to Margaret from her mother upon Margaret’s marriage, and Kat knew it to be a precious family heirloom. Wrought of silver and marked with the smith’s stamp, the chatelaine contained three useful items that hung from slender silver chains joined on a silver hoop.

In Kat’s case, and in the case of the other chatelaine in the story, these are objects endowed with magic – a magic that can be used for good or for ill. I was inspired to write the novel because a friend of mine posted an image of a chatelaine that was so evocative – and creepy – that it brought to my mind a story. (You’ll have to read the novel to find out more – no spoilers here!)

Originally the chatelaine (the word is linked to the French word “chateau” or castle) was the actual person who held the keys to the castle. The word evolved to mean the keys themselves worn in a cluster, and then to mean something like a charm bracelet worn at the waist. 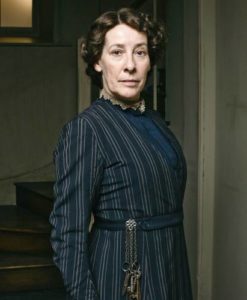 Mrs. Hughes and her chatelaine.

The Oxford English Dictionary says a chatelaine is “an ornamental appendage worn by ladies at the waist, supposed to represent the bunch of keys, etc., of a medieval chatelaine; it consists of a number of short chains…bearing articles of household use and ornament.”

If you’ve watched Downtown Abbey, you’ve seen the chatelaine worn by Mrs. Hughes, which is a set of keys and other items. 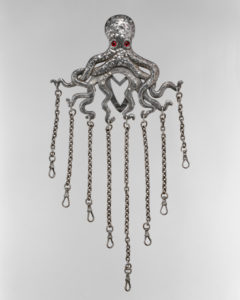 Some chatelaines were much like a Swiss Army knife of practical objects. Some were strictly ornamental. Many are quite beautiful. You can think of them as physical “apps”.

What do you think – is it time to revive this fashion statement?

8 Responses to “The Chatelaine”