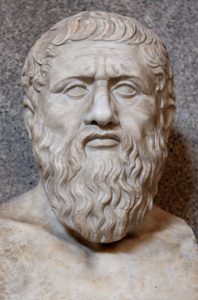 In The Charmed Children of Rookskill Castle, Kat and her fellow students at the Rookskill Castle Children’s Academy in the fictional burg of Craig on the coast of Scotland are taught by instructors brought in by the Lady of the manor. Their English instructor, Miss Gumble, has them study the Allegory of Plato’s Cave. This instruction turns out to be a lifesaver. (How? I’ll let you discover that.)

What is the allegory?

Plato founded his famous Academy in an Athens grove in 387 BC in order to informally tutor those intellectuals who wished to discuss philosophy and the sciences. Socrates was his mentor, having conducted his own school (the Lyceum) before being put to death after charges of corrupting the youth of Athens. Plato continued Socrates’ tradition of oral argument and debate; Plato’s most famous student was Aristotle. Plato wrote his treatise, The Republic, as a way to elucidate societal behavior and in particular the notion of justice. Our democratic ideals descend from Plato’s arguments. 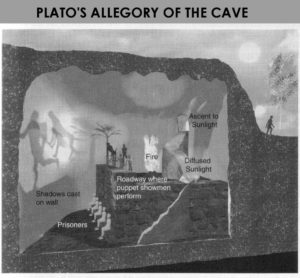 One of his most famous arguments in favor of thoughtful pursuit of knowledge is the allegory of the cave.

Plato argues that the world is divided into two realms: the visible, and the intelligible (which we can only grasp in our minds). In the allegory of the cave, he suggests that people are like prisoners chained from birth in a cave and unable to turn their heads. They can only see the wall of the cave before them, and behind them is a wall along which puppeteers can walk. A fire casts shadows of the puppets on the cave wall.

Those prisoners in the cave believe that the shadows are reality. When they are freed from their chains by education they discover they’ve been seeing only shadows of copies of reality, and not reality itself.

Plato questions the notion of reality in this allegory. Even more importantly, he suggests that those who can leave the cave – see the full scale of reality through the gift of education – must take this knowledge back to those who haven’t yet left the cave. Knowledge should be the goal of all of us, through education and realization. 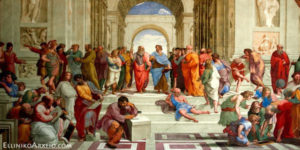 I really believe that knowledge and education are the foundations of a rich, full life. Plato’s allegory works for me, just as it does for my character, Kat.

2 Responses to “Inside Plato’s Cave”