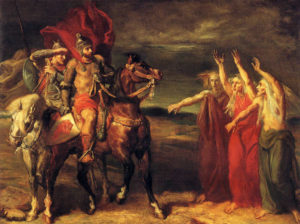 Macbeth and Banquo confront the witches

One of the reviewers of The Charmed Children of Rookskill Castle pointed out that a chief character in the novel is “a tragic figure, almost a Lady Macbeth”. You might or might not remember Shakespeare’s tragedy, so here’s a bit of background that may explain why I love that comparison so much. (Note: I’m deliberately not naming my “tragic figure” in this post, so that you can discover who it is for yourself.)

Macbeth is a Scots general who receives the prediction that he will one day become king of Scotland. He’s set upon his deadly path by three witches who can foretell the future but who also use their power to play with human emotions. His ambition drives him to commit acts of murder, first of the current king, and then of many followers and allies and presumptive heirs and their children, including his compatriot Banquo, until Macbeth himself is undone.

Macbeth is goaded to action by his wife, who will stop at nothing to see her husband become and remain king, her ambitions initially outstripping his. But as the story unfolds the Lady is torn by guilt and driven toward madness – sleepwalking and obsessively washing the blood from her hands – until she finally commits suicide. 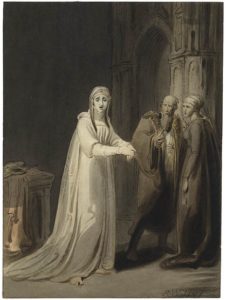 Macbeth has always been one of my favorite Shakespeare plays. It’s a creepy horror tale set in Scotland and rich with magic and mystery. Shakespeare uses phrases that echo nursery rhymes or fairy tales, reminding the audience that behind the story is longing for a child and heir: “Open locks, whoever knocks”; “The Thane of Fife had a wife”. There’s little doubt that Macbeth and his Lady love one another, maybe too well.

As I drafted The Charmed Children, I struggled with my “tragic figure”. She’s an antagonist, yes, but she must also be multilayered and multifaceted, not flat. I had to give her a backstory that would make her at least understandable, if not sympathetic. It is, in part, her longing for a child that drives her terrible behavior. 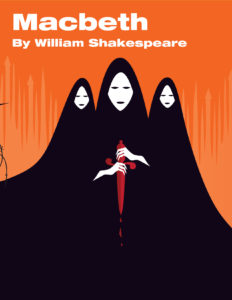